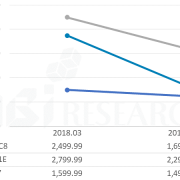 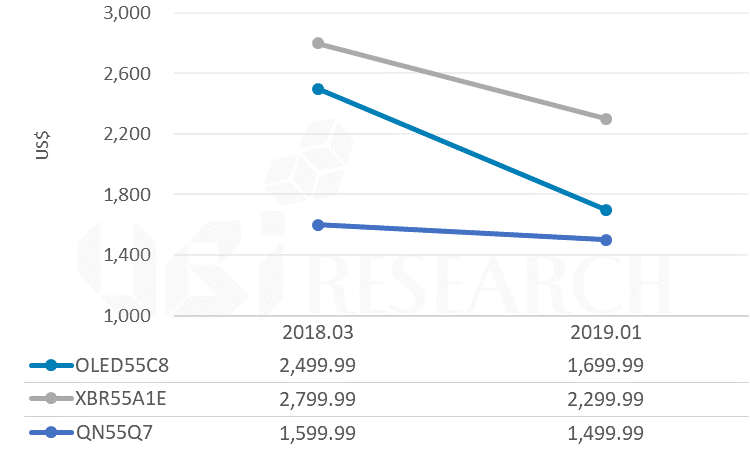 There is a difference of US$ 1,500 in price between LG Electronics’ 65inch 4K OLED TV and Samsung Electronics’ premium model 65inch 4K SUHD TV (US$ 4,499). Analysis shows that the monthly average price decrease for OLED TV between June and August is 18% while SUHD TV’s is 5%.

During the last earnings results announcement, LG Electronics reported that UHD OLED TV will achieve price competitiveness in 2016. If the price decrease continues at this rate, OLED TV will be able to aim for market expansion against LCD TV through price as well as its many advantages such as design freedom, thickness, and picture quality.

Although the overall sales increased through Galaxy S6 release, due to the supply issues of Galaxy S6 Edge, and increase in marketing cost, the business profit did not much increase. Samsung Elec. explained that due to the decrease in sales of low-mid-price old models, degrowth was shown compared to the previous quarter. However, ASP was much improved due to product mix development.

Yi announced their plan to increase the market share through flexible price strategy for Galaxy S6 and S6 Edge in the second half and strengthening of low-to-mid price smartphone line up. He also mentioned that enlargement of display size and AMOLED panel use could occur for future lower priced items.

The price of Galaxy S6 Edge that exceeded US$ 1,200 initially, recorded US$ 739 in the second week of July. If the currently operational A3 line yield improves and investment for transforming part of rigid A2 line to flexible occurs, flexible AMOLED panel’s mass production capa. will increase from the second half. This will simplify AMOLED panel supply process, and it is analyzed that the flexible price strategy for Galaxy S6 and S6 Edge will be feasible.

For the display section, it was revealed that the results were slow compared to the previous quarter due to increase of cost from new flexible display line ramp up and decrease in smartphone demand. Samsung Elec. explained that in the second half, they are planning to increase the market leadership through flexible technology improvement. The new growth power will be achieved through development of new applications such as transparent, mirror, and head mounted display.

Samsung Elec. revealed that there was difficulty in acquiring initial supply regarding the Galaxy S6 Edge. They explained that this was due to the use of new technology, including the large area evaporation technology of A3 line that began operation in April this year. However, the problem has now been solved and reliable supply is possible, and the firm revealed the possibility of supply of flexible OLED panel to external companies. The panels will be supplied to meet the needs of client and market, and some capa. establishment will also occur next year. Product performance and production cost competitiveness are improving, and the firm revealed strategy of increasing the OLED panel sales to external companies this year.

A department head Byeonggyu Roh of LGD emphasized “cost reduction of LGD’s OLED panel should be carried out across all processes and continued” and introduced its cost reduction strategy for the OLED panel for the 2nd Annual OLED Workshop held on 24th.

Key cost reduction strategy includes various ways such as investment cost reduction by rearranging the existing lines and modifying equipment; material cost reduction by optimizing the thickness of layers for TFT, the OLED and encapsulation; tact time improvement; and production efficiency increase by investing in M2 line. Also it was expected that soluble process will be the core technology for cost reduction in the future.

CEO of UBI Research, Choong Hoon Yi, said “LGD’s ultimate goal is to reduce the price by 1.1 times compare to LCD” and announced “cost down can be realized through reducing investment cost as 65” UHD OLED TV displayed at SID 2014 applied the existing co-planar to reduce from the previous 6mask to 4mask.”

LGD recently began supplying the OLED TV panel to China, and it plans to operate the M2 line in the latter half of this year. It also dropped the price of a 55” FHD curved OLED TV to $3,999 from the released price of $15,000 and a price war with the LCD TV is about to begin.